The Battle of the Grungy Grout 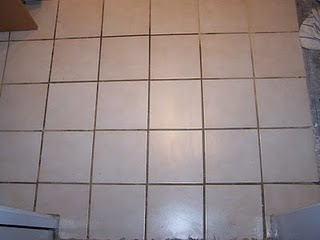 So, many of you may remember where we left off yesterday. The excess grout left all over the tiles during installation had been removed with a putty knife and the Mr Clean Magic Eraser.  However, the grout lines themselves were still the same icky-nasty-dirty mess.
That's it, hanging out on the right over there. Say it again, EWW! For the record, much of this isn't even our dirt! It was worse when we first moved in two years ago.

Choices of weapons in this war? Baking soda or the smelly, burn-your-hands off chemical spray. I did buy one to use as a more scientific experiement, but I nearly choked when I opened the bottle! The fumes were awful.  I couldn't stand it, not even to try it out so I broke out the baking soda and went to town. Very low tech, I dumped a couple big scoops into a shallow bowl and filled it up with hot water to make a kind of slurry. It was wetter than a paste, but not a liquid by any means.  I grabbed a scrub brush, scooped some baking soda from the bottom of the bowl onto it and tapped it onto the grout lines. It kinda slid off the brush and puddled in between the tiles.  I let it sit and soak in for ten minutes or so before giving it a couple quick back-and-forth swipes with the scrub brush and rinsing the baking soda off with a rag. the results? AMAZING! See for yourself below. 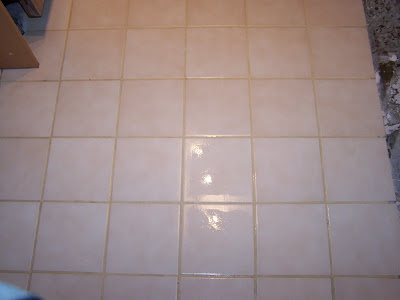 I KNOW! I can't believe it's the same floor from when we started; it looks almost brand new. When my husband got home that night, he thought I'd regrouted the floor. Seriously! It was THAT clean! From baking soda, a bit of water and a few quick swipes with a scrub brush. Hmm, wonder how clean it would've gotten if I'd thought to do the final rinse with vinegar? Something to try next time! Like next week on the bathroom grout...

PS-Just a side note, the baking soda completely cleans it, but can't lay down a layer of protection against future dirt so once I let it dry out completely I gave it a good sealing with a paint on grout sealant to prevent a return to its previous state of ick. Thus far the sealant is working and we are still enjoying spakling clean grout several months later!
Posted by Liz at 1:00 AM